I've realized once you enter recruiting duty, it's a whole new life.  It's no longer the "Air Force" life, its even more unique then that.   There are some bad things about it being unique, even comapred to normal active duty, but also some good things.

Like the Annual Awards.  I'm not sure if other branches do this too (other branch wives- let me know!).  Its the one time we come in from our spread out squadron (4 states), and have fun.... oh and they give some awards out too.

As I've said on MANY occasions, my huband is a rockstar.... I've known it forever, but, um... how can I say this politley... he pretty much rocked the night, and swept most everything he was nominated for.

It was SO awesome to go home with the Rookie Recrutier of the year, gold badge nominee, Bronze AFRS award winner, Legend Recrutier, and our Flight Recruiter of the Year.  You'll have to ask him how it felt to go home with SPOUSE OF THE YEAR!!!

(I suppose it's not approprate for Spouse of the Year to have a facebook quote of "I want out of the Air Force"... maybe I should change that....)

I forgot my camera (gasp!), so right now all I have are the grainly 'iphone via facebook' photos of is office partner. 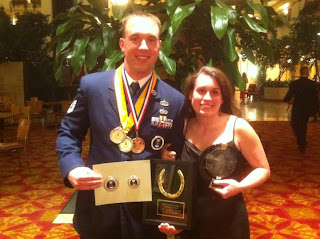