I think it's funny that after 5 years of marriage, Pave is JUST realizing that the extra money we make while he is TDY (this time to NCO Academy) really turns out to be my project money (it was the same thing with his deployment money...).  Yes- I'm that wife that spends more money while her husband is gone... don't send me snarky comments- he just laughs at me, and says he 'never knows what house he's going to come home to'.


I think part of the reason is that my husband has some very OCD tendencies... That said- it's hard for me to do projects while he is around because he can't handle the in-between stages of destruction production that it takes.  It's best if he just sees the final product.
So... as for my most recent project, here are some ending pictures:  To re-cap, we went from this 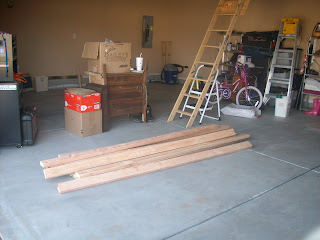 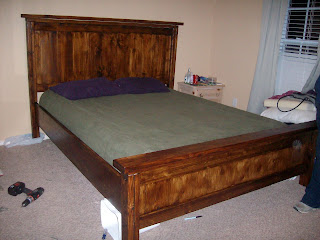 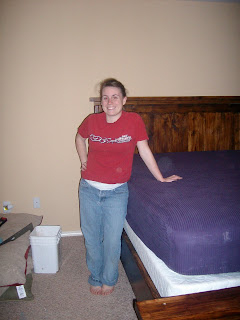 If I would have blogged about this earlier, you would have felt my pent up RAGE from having to rebuild the damn thing 4 times... because the place where we got the plans- ya, she was smoking crack or something... but now I'm far enough removed, that I can look at my bed and just be happy!
Pave also doesn't do well with painting, because he sees me do unsafe things, getting creative to paint all the high places in our house.... one day I sent him this picture (more zoomed in so all he saw was wall, the placement of doors would have given away what room it was in).  He was dieing to know what room I was painting... he didn't discover it until he got home. 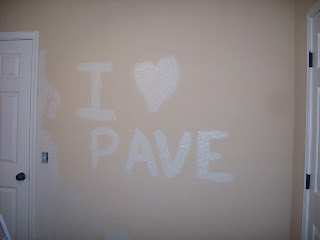 I had to re-paint, because I was TRICKED into getting this crazy-ass fabric for the headboard.  I used to have a brown rough silk fabric headboard in our master bedroom, but since I just built us a nice new bed, it was no longer needed, so it got transferred  to our guest bedroom. I was harassed (unendingly) by my two friends for being vanilla... and then they tricked me... though its sorta growing on me- Pave on the other hand, is very glad its in the guest bedroom... a door that we keep shut most of the time (can I blame my vanillaness on him?) 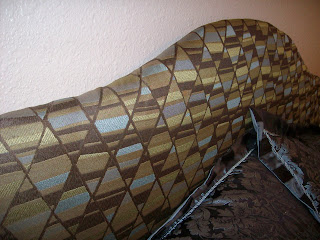 This is also another reason projects ONLY happen while Pave is gone... because this is what the office and hallway looked like while I was re-doing the guest bedroom... ya, he wouldn't have even been able to WALK on this side of the house without freaking out. 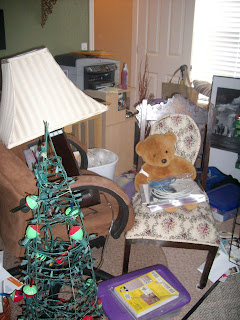 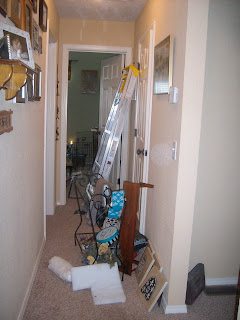 The guest bedroom is almost done, we switched 'inspiration' for the room, so it's looking kinda empty now, but I'm on the lookout for things to polish it...
Like some cool green pillows to throw in with all the blue 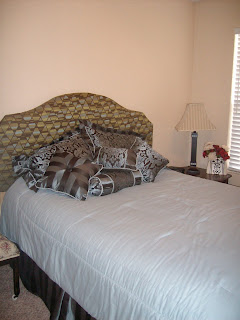 Some cool green 'stuffs' to come out of this pot 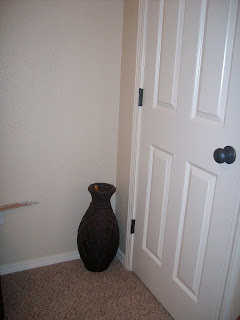 And some equally funky fabric to re-cover this chair in... 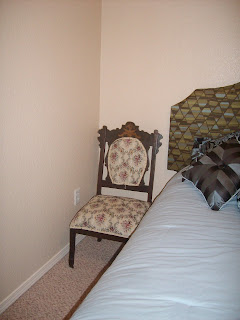 All is well that end's well, Pave is home, the bed is amazing (and I earned some 'garage/tool credit' from Pave), I've painted 4 more walls to cover up the ugly pink-salmon-tan color the builder put throughout the house, and now I can plot plan my next 'designing adventure'... he has a class to go to during the summer!