If you remember, the dog's aren't supposed to get on furniture... because someday we will get new stuff, and I don't want them on the new stuff.
That being said, my husband is horrible about letting Baxter, the baby (though he's not really a baby anymore) up. When we first got him, he would say "But he's to cute to sleep on the floor'. Baxter had now figured out how to play Pave, and will sit there and look at him with his 'puppy dog eyes' and quietly whine. It doesn't work on me. But Pave is not so immune to him.
After class last night, I went to check my email and facebook, and then came out to this.... 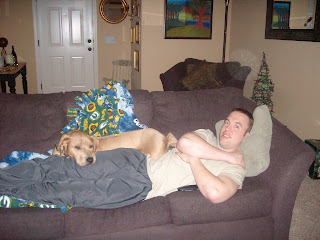 Really?!? I asked Pave why Baxter was up there (there is usually some humorous excuse), and he said "because of dog fighting" Hunh?!? I guess he had been watching a show that was about dog fighting on Animal Planet, and felt bad for Baxter. Granted, we think Baxter has Pit Bull in him, but we've had him for 2 years, got him as a puppy, was never fought (or even came from that environment), and the only scars he has are from his big sisters... KNUCKLEHEAD- both of them! 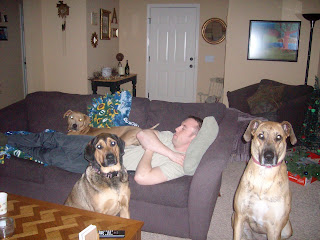 I think that the girls have the perfect expression to show their true thoughts "WTF! How come he gets everything... we were here first!" So, for the remainder of the television program, I sat on the floor with the girls, giving them lovin', while the 'boys' enjoyed the soft couch.