Now that Pave is in the swing of things, sort of, his schedule has changed a bit. I enjoy it a little bit more, because I get to spend a BIT more time with him in the evening. At his old base, because of the travel time, he would go to bed about 9ish, and wake up just before five... now that he doesn't have the long commute, and he doesn't have to be in at 7am, he can stay up a little later with me, watching our favorite shows. Depending on the day, and if he's going to the gym, some mornings he doesn't even leave until after 8, which means by then I'm half away so I can cuddle with him.

However, (and this is a big however...) most mornings, I have someone else cuddling up next to me... hes cute, loves to cuddle, and has a wrinkly face, and more then that, he's not supposed to be on the bed at all! He's my little boy Baxter. We have a 'strict' no pets on the bed/couch/etc... which isn't always 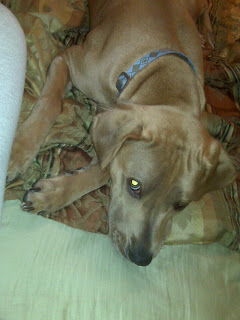 upheld. Well, most mornings this week, I have woken up with him in bed with me, which means he jumps up sometime after Pave leaves. This morning, his nose was tucked in right under my chin, and the rest of his body was about as close as he could get it. Now really, how can you resist this face? So every morning we cuddle, and then I kick him off the bed! Sorry the picture isn't great, it was taken with my BlackBerry...

All I have to say is he is such a knucklehead!