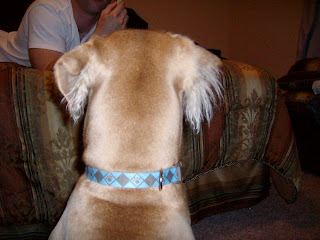 So our dogs needed a bath, bad. I've been putting it off for over a week, so I sucked it up and gave All. Three. Of. Them. Baths.
That's not the bad part usually, it's the clean up of the bathroom after giving all three of them baths.
The BEST part after baths though is our Little Boy Baxter's ears- They turn fuzzy! We don't really know all the different breeds that are in him, some Shari Pi, Lab, and Pit Bull... whatever it is, it has caused him have these spots of soft, soft hair behind his ears. Usually they are kinda nappy, because of the other dog's spit, when the wrestle (which is All. The. Time!) We always say, that's how you know he's clean!