An off kinda week

I have been so overwhelmed with my family (in a good way). They were in town for a very long time (again- great), but it was exhausting. We were always doing something, going to a show, going out to eat, going to do things around town (which will have pictures posted soon...).


And then throughout that family time, I was sick one day (so sick- loose five pounds I throw up so much sick), and then the last full day my parents were in town*, I was prepping for a colonoscopy. Wait- you might ask- am I reading an old lady's blog... only old people have those...

Nope friends, not just old people (though my Dad who is 63 and I had our first ones a month apart!) have colonoscopies. When I was 24, I went to the ER with horrible pain right under my ribs.... a hospital admittance, Red Cross message (my husband was deployed), a colonoscopy, and 4 days in a small room, I left the hospital with a polyp removed, that was pre-cancerous. That doesn't sound like such a big deal, except most 24 year olds don't have that particular procedure done... it usually starts at 50.... and any polyp will eventually turn into cancer... so had I waited 26 years for my first scan... well- things just wouldn't have added up.

My scan was fine (though the prep sucked...), but this doctor wants me back in another year. I was doped up on so much stuff, I couldn't remember the conversation**, however when my husband told me about it again about 8 pm last night, it resulted in HYSTARICAL tears... I hate the prep... It sucks...

However, a good friend reminded me that though it's not so fun, it's my way of fighting back against cancer. For those of you that know me personally, this is a small passion of mine. Ever spring, my husband looses me for about a month as we prep for Relay For Life, the American Cancer Societies flagship fundraiser. For those of you that don't know about Relay For Life, or what the American Cancer Society, click the links to find out more! 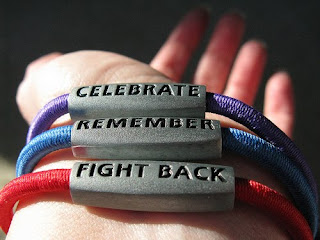 * Yes, on the last day they were in town, I got to eat breakfast, then was on a clear liquid diet (as they went out to lunch at a yummy pizza place, toured a chocolate factory (complete with samples and chocolate cupcakes), AND went out to Zio's (one of my favorite restaurants).... and I got to drink sweet tea, sprite and chicken broth...)


**So, they didn't knock me all the way out, it was an 'unconscious procedure' or something like that. The used versed, which I guess makes you not remember... the procedure... or getting dressed... or the ride home... or the voice mails (from numbers you didn't know) you deleted (so you don't know who called you and left those voice mails)... or the emails you sent... or the TWELVE people you called...

The first thing you remember is waking up in your bed that evening, with a waterbottle, and a plate with gummie bears and M&M's on it (WTF?).