I feel like I've been absent for a while... but I'm back!


Between trying to help my senior boys finish up their projects (which I now get to grade), my semester end wrap up (read: massive projects/assignments due), birthday parties, Relay for Life, a "House Party", and being honored guests at an ROTC's award ceremony, things have been busy.

It also didn't help that I was moved out of my normal 'classroom' (the computer lab), and into the conference room (ie- no Internet) so the other classes could do the end of year testing....

So, here are a few pictures to catch you all up....

But, before we get to that, some of the most exciting news......

As I've sorta talked about here... we've struggled through infertility (and after 7 miscarriages, insanity)  Because I was adopted as an infant, I've always had a place in my heart for adoption, we alays knew that adoption was part of the plan, we just didn't relaize that it WAS the plan.

We met with an adoption case worker last week. The meeting was over an hour, and my husband was able to ask her a lot of questions he had, and she got to know a little bit more about us. She will be the one doing our home study, so Pave wanted to make sure he felt comfortable with her. We talked about it a little bit that evening, but on Friday he said that we should spend the weekend filling out the first application packet!! Whohoo!!!

So, beside doing Relay for Life this weekend, and finishing an assignment and final that was due by noon on Saturday, and having a "House Party" Saturday night, we did that....

We found it funny that the only contact info we had for one of our references was face book because they had moved.... is that a bad sign? We spent a few hours on the phone catching up (we last talked right after Christmas), after she got the message I sent her on face book....

So, the packet is done, we just need to get it notarized, probably tomorrow, write the application fee check, and send it off!

I don't know if I've mentioned lately, but my husband is pretty much the most hansome man I've ever seen.... add his 'blues' to the equation, and it's even better.... (we didn't used to call it "Blues Sex Monday" for nothing- he has to wear this blues every Monday at his old job.)

We were invited to a JROTC end of year award ceremony at one of the local (ok an hour away) high schools. It was fun to get dressed up, and the food wasn't bad either (unlike most military functions) 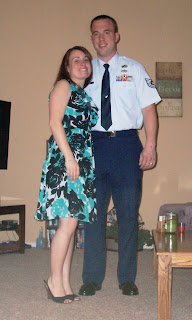 So besides being ridiculously handsome, he's also pretty much a rock star....

This is the award he got for being a 'High Roller". He put in six people (notice the dice) in the month of February, which was pretty awesome. This is the cool award he got from it (along with someones fingerprints, on the INSIDE). 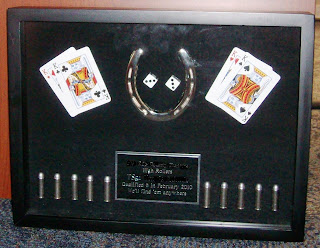 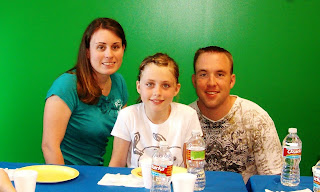 I somehow don't have all my Relay for Life pictures, but these are a few of the ones I have....

We have been having rain ALL week. For those of you that don't know about Relay, its an event to raise money for the American Cancer Society. Its often held at a track (usually a high school field), where the teams 'camp out' all night. Our event goes from 7pm-7am. Well, that's no fun in the rain, so at 9:30am Friday morning the chairs decided to move it indoors. It was a lot of work, but so worth it. The event turned out great!

It was our 20th anniversary, so they hung the t-shirts from all the past years. 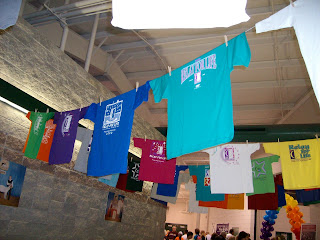 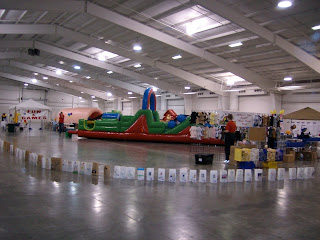 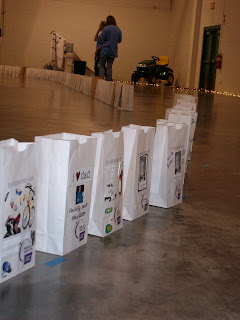 The color of Relay is purple, so all the survivors wear purple shirts 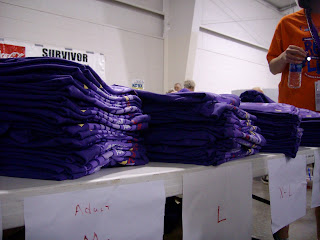 It's not a Relay without the Super Colon! 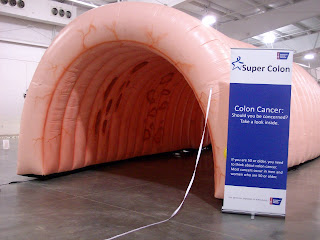 Basket auction- each team can make a basket (or several) to help raise additional funds. There were some AMAZING baskets! 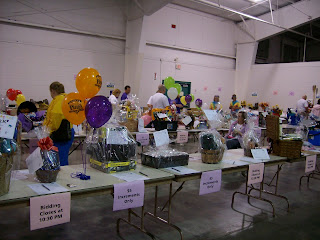 So after everyone staying up all night at Relay (not me- I felt like crap, cough is still hanging around, plus I had an assignment and final due by noon on Saturday, so I went home to do that....)

We had a House Party! It's actually really cool. You go to the website and 'apply' to throw a party. If you are picked (I was picked to host the Kraft Summer Taste of Summer party). They sent me a box of stuff: beach balls and Frisbee, an apron, 2 reusable bags, and then all the samples of the food. There were 3 bags of the new Kraft Home-style mac and cheese, 2 boxes of the Ritz Crackerfulls, 2 packages of the new Kool-Aid 'fizzys' that you drop into a bottle of water and then coupons for everything else (to get for free). I went to the store and got the new DiGIorno pizza and bread sticks (by far my favorite thing of the party, with the home-style mac and cheese a close second), the new Oscar Meyer shaved deli meats (ham, turkey, and roast beef). I was supposed to get something else (100 calorie snack packs) but our local Wal Mart didn't carry them....

We had some cheese and queso left over from the catering for Relay, and what's a party without cupcakes, but other then that, everything was free, and yummy! 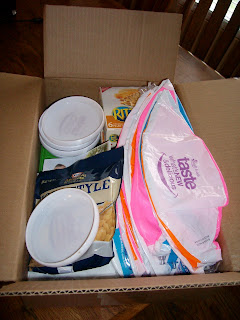 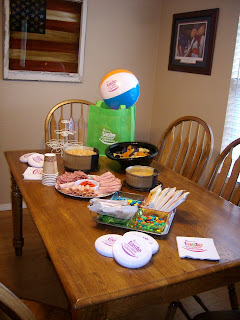 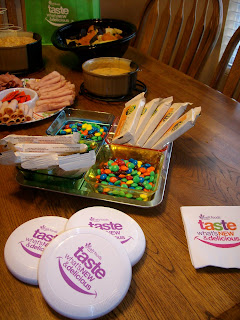 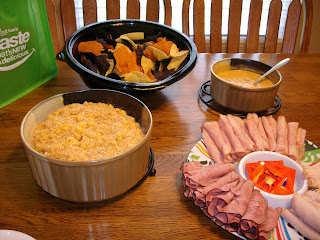 So... now that ALL that is behind me (and I'm back in a room with internet...) I hope to update/read/comment more!