Drug Free is the way to be!

There is no better way to start off this post then with this wicked cool award I got from Ashley at Dog Tags and Pearls. She has been an amazing friend, and it's nice because she knows about the 'fun' that being a recruiters wife is, as well as adding fertility drugs to the whole 'fun' mix! 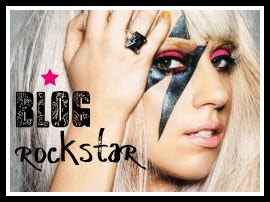 To accept the award, all I have to do is tell all my bloggy-land friends why I'm a rockstar... but that's kinda funny, because I was Pave's cheerleader during recruiting school, and always called him my "rockstar". So I guess I'm just happy enough being a rockstar's wife! Ok, in all seriousness, I will do almost anything, but those around me will ALWAYS know how I feel about it.... good or bad! I just asked Pave if he thinks I'm a rockstar, and he said "Yes, because you did my boards" (talking about the 4 hours and 1 bottle of nail polish remover I used tonight to clean the lines off the boards listing all the people that have joined and are just waiting for jobs... he needed the squares to be smaller, because he had to many people to fit on them.... once again, proof that he's the real Rockstar in this relationship... I just do the grunt, black finger's, hand's smelling like nail polish remover, broke a nail, work).

I nominate my friend Jen at Trying to Get Knocked Up By Another Man who has been an amazing support to me while going through the whole Military Wife, military training, infertility bull shit!

I also nominate The Mrs. at Trying Our Best, because in the last few days, I have gotten many a laugh out of her. As a side note, she is looking for a hamster for her son, see, he has show and tell, and has a hamster ball, but no hamster, anyone who has an extra hamster, send it on over... double score if said hamster is pregnant! :) (go read the back story.... )

I honestly don't know if I could have made it through today with the full on fertility drug affects. Sunday was my last FSH injection, I triggered on Monday, and this morning (early- ugh!) we had our 'date', so I'm officially in my two week wait! Tomorrow I start with the Lovonox injections, which I hear bruise really bad... we shall see!

Can I once again just say, I'm sick of making dinner for 8:30pm because Pave is working late cleaning up someone else's messes.... and yes, you'll probably continue to hear me bitch about it until a)they all get resolved, b) they call someone back off of terminal leave, slap his ass with an article 15, and make him clean up the shit.... ugh!

Now that I got that off my chest, I MUST tell you about my day. I'm a substitute teacher, and I've been in this same 4th grade classroom at LEAST 4 times before this year. I have never had problems with discipline in this class (or really any other one), that's one of my 'strong suits', classroom management, which is why subbing is fun for me (I guess). Also, let me preface 'the list' by saying except for the one time that two 8th grade boys came to blows outside my classroom (I was a 'real' teacher, science, New Mexico, and one of the boy's was my little brother), I have never, NEVER, sent anyone to the principals office.... that said....


In no particular order,


*Had a student crawl under a table and not come out because his table was being mean to him.


*Had 2 students from the 2nd grade class across the hall (who I also have subbed for several times this year) spend the better half of the afternoon with me.


*Trying to get their attention during recess, not successful, to the point I blew my whistle.


*Knowing by noon that the only thing getting me through was the shake I was going to get on the way home.


*Looking out the window and seeing snow.... can you order a shake when it's snowing?


*1 student that I wanted to staple his pockets to the chair.


*Totally spacing an assignment (again, a first for me) by setting it to the side, and forgetting about it....


* And the shining glory of today.... 2 boys SHOOTING RUBBER BANDS AT EACHOTHER.

It was at that point that I yelled (and I'm not really a yeller, but today, that all changed) to "GET OUT". I turned around, counted to ten, and started the math lesson.

All I can say is really?!? There were 6 subs in the building, and everyone I talked to had been to the class they were teaching before, and EVERY. SINGLE. ONE. said this had been the day from hell!

Maybe it was leftover's of the 5 day holiday, or the mind numbing Christmas break that is 'almost' here, or the fact its so stinking cold they haven't had outdoor recess all week, whatever it is, I've decided I'm not going to risk it tomorrow....