I'm not quite sure how tomorrow will go... so I don't know if I'll be around.

A year ago, was one of the worst day's of my life.
A year ago, Dr. V took my baby.
A year ago, even though I know he was gone before, he was really gone.
A year ago, I cried on the way to the hospital for my D and C as my husband got a text message that his sister had just given birth.
A year ago, I didn't give a damn that she had a baby, I actually told my mother in law to stop sending me updates, because I really didn't care.
A year ago, I was really heartless to the nurses who tried to be so kind to me.
A year ago, I was hopeless, and angry, and sad.
A year ago, my husband wrote me a letter while I was in surgery, and it still makes me cry to this day.
He was the only one in the waiting room, I remember walking back to the pre-op area where they could get me ready. I looked back right before the door closed, and he looked so defeated.
A year ago, we lost our little Sea Monkey.

This is the last picture I have of him, his heart was beating strong... I still have it on my Blackberry. 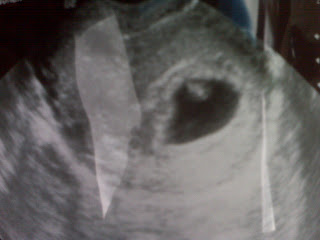