The third day we were there, we took it pretty easy. My Aunt and Uncle had been up for close to 20 hours in their travels to fly out here, and we had the early morning too (extra early, because of my dumb blackberry).

We slept in, then went to church. When church was over, the roast Mom had made for lunch still wasn't quite done. What to do with the extra time??? Why not make a pie!?!

My Dad makes a FAN-TASTIC apple pie (he's even won awards for it...) There is an apple farm that have come up with their own 'apple brand' (is that what it's even called?) It's called the "Champagne" apple. It is wonderful to eat, as well as to cook with. Last week sometime he went up and bought two huge bags of apples. We peeled, cored and sliced a ton of apples, and ended up making his famous apple pie, and two apple cakes (one without nuts for Pave). Mmmmm.... so good! 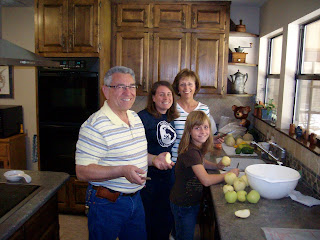 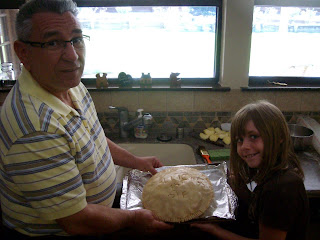 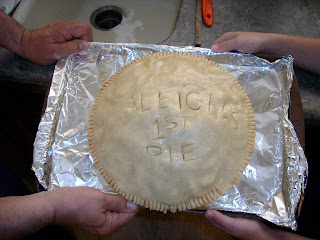 We decided that night to try the Tram, which takes you to the "Crest" the top of the Sandia Mountains. The rides that ngiht were canceled, literally, 1 min after we got there, because of high winds on the top of the mountain. Once the sun set, we at least got to see some of the city lights (which quite possably could be the best thing about Albuquerque). We were planning on eating on the top of the mountain, but instead went to a great bar b que joint called the County Line. It's a must for anyone that visits there! 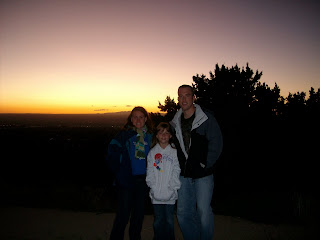