So after I wrote the last post, I went to look for the pictures of the trip Pave and I took to Dallas last year. And.Then.I.Panicked. The were gone. I didn't have them on my computer anywhere! AUGH! We took a ton, with my parents, at the hotel, meeting Jason, going to Dallas Stadium.... where were they!?! It was just about then that Pave walks in and sees my panic look as I'm clicking through all my folders to find them. Now, usually I am really good about labeling and putting everything in the folders, and my only thought was that I accidentally drug my 'Dallas Trip' folder into another one. HA! Nope... all the pictures are on HIS computer! Phew- that was close.

My parents own their own business (credit card processing), and I work for them. Or I did, well, I still do, sorta, but in a new position... anyways, back to Dallas. The yearly 'convention' that we go to is in Dallas at the Texas Gaylord. I went to it in 2007 by myself, but they were having to pay $250+ a night for my room, it wouldn't cost anymore for Pave to come along. Just the plane ticket, which was written off as a business expense (love it!). It was awesome, because Pave had just gotten home from his deployment about a month earlier, and my parents hadn't seen him yet. Also, we already knew we were pregnant, so that was fun to be with my parents and talk about that. We did the whole convention thing, but then stayed in town for an extra day to go see the King Tut exhibit that was there at the time, and of course, Dallas' old and new stadium. 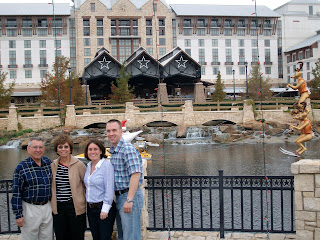 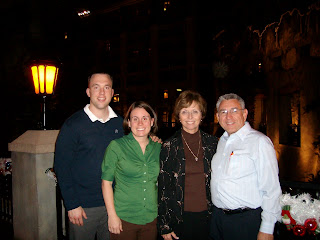 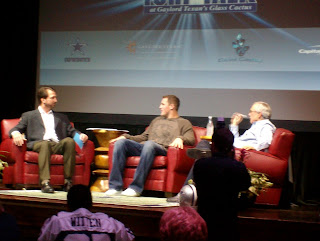 The Texas Gaylord has a nightclub on its campus called the Glass Cactus. Every week on Wednesdays, one of three Dallas players go do "Turf Talk" with a local sportscaster. It's radio broadcasts from the club. The week we were there, Jason Witten was there. I had my Dad distract Pave and Mom and I went to talk to the Concierge Manager. I told her that my husband was a HUGE Dallas fan, and had just gotten home from deployment (yes this is the one and ONLY time we have pulled the 'deployed soldier card'), and was there any way if we gave her a football (which we bought at midnight the night before we left home and had to squeeze into our luggage for just this occasion!) if she could get it signed. She told us to get to the club early, and she would do what she could. The dance floor had been turned into VIP seating, so we got one of the closest tables we could just off the dance floor. Jennifer (the manager, and one 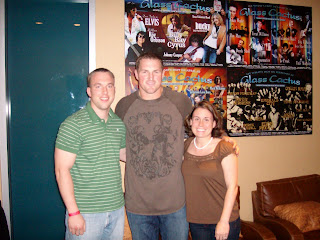 who deals with all the 'celebrities') came and got us to go into the VIP lounge. She said that if not all the VIP's showed up, she would move us to a closer table. We waited for Jason to come, but it was getting ready for show time when he got there, so they didn't have time for him to meet anyone. She said to come back over to the VIP area where the drinks were served just before the show closed out. We had a great time listening to Jason go over the previous Sunday's game, he really was funny. We ended up being the 2nd family in line to meet him after the show. He was a down to earth guy, and truly was grateful for Pave's service. He spent a few minuets talking to us (longer then most the others), and signed our football, and an autograph for one of Pave's troops who is also a huge football fan. 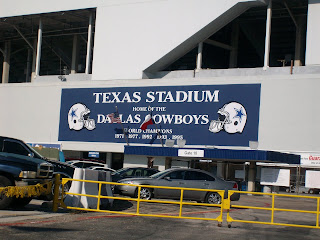 This is a picture of me 'whoring' myself out on the "C" of the Dallas end zone.... This was Pave's background on his computer for MANY months! 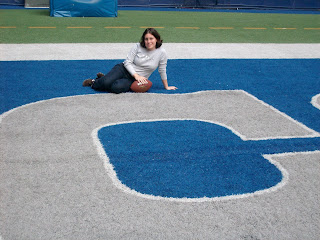 Someone had gotten married on the 50 yard line star during our tour, so we had to wait until the wedding party was off the field before we could go fool around throwing the balls and stuff. You can still see the white rose petals. That's true dedication to your team! 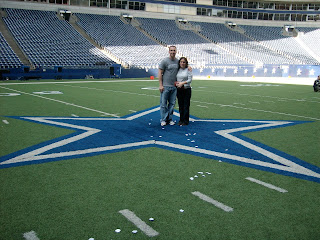 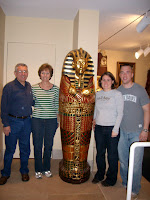 This is outside the King Tut exhibit. I think it was at the Dallas Metropolitan Museum of Art. It was a really cool exhibit. They had a ton of artifacts from many of the different pyramids.
Posted by AF Recruiters Wife at Sunday, September 13, 2009