Febreze candle's and our path to financial freedom

So this post started out as one thing, and turned into something else... so I had to go back and change the title... I swear it will all come together, keep reading!


So, sorry, no zoo pictures up yet, tomorrow hopefully. Today was spend cleaning out TEN years of my husbands receipts... seriously, there were insurance cards from 8 cars ago that were dated 2000.... it was excessive. I let him have his little two drawer filing cabinet, and I took over most of the organizing/bills when we got married. Let's just say our two versions of filing things are vastly different. When we moved, the movers broke his two drawer cabinet, so we had to transfer everything to my big four drawer one (I used to use it for business but no more of that, so it has LOTS of empty space). After shredding two bags full of stuff, everything is now condensed. I went through and explained where everything was, in case he needs it, but let's be honest- He'll never look, he'll just ask me to get it out. Oh well, its worth it to know what everything is worth.


My mom who is queen of organizing, was actually a little impressed with my filing... though most of my life is controlled chaos (as Pave calls it...) my files are IMMACULATE! I blame it on two men... David Bach, and Dave Ramsey. :) They are my 'financial advisers'. Seriously, I love them both! These are the two books that changed my life....well, our life! 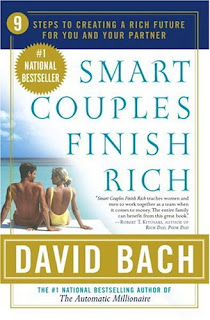 We got this one from one of my parents friends at our wedding. I didn't read it for about 18 months, and holy cow, what an eye opening experience it was. Not so much the 'get rid of credit cards to build your wealth', my Dad had been preaching that to me my whole life. David Bach has this filing system... it's amazing. So one night I started pulling bank account statements, credit card statements, bills, etc and wow, just wow! We had some huge issues! Until then, he paid his stuff with his paycheck, I paid for mine, and we split (mostly) the house bills. Between the two of us, we had like 12 credit cards. Lots of them had 0 balances, but were still open. It made us face where we were financially as a couple. After that point we combined bank accounts, bills, and began trying to take control of our financial future. 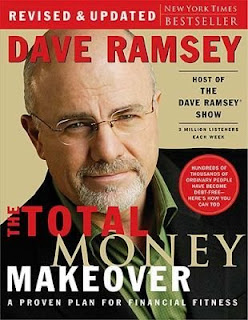 A few years ago, the Chapel at the last base we were at wrote a grant to do the Dave Ramsey Financial Peace University. It is a faith based plan to get out of debt. We were able to take the class for free because of that. Dave has baby steps that are easy to follow! 1) Put $1,000 in savings for an emergency fund. Pave is OCD about many things, including money, so that was already there. 2) Pay off your debt's from smallest to largest (everything but the house). We are still on that... so far we paid off a computer, furniture from college, several credit cards, the damn Star card, line of credit at our bank, my car, and most recently part C of my student loan. YEA! We are still working on part D, (should be done as soon as that damn special duty pay kicks in... with the back pay they owe us, it will be a good chunk, so D will be almost done!), and then its on to his truck. Somewhere in there Pave promised to let me put our debt snowball on hold, and let us buy some bedroom furniture. I know, not a priority, and I don't really need it, but I need it. Step 3 will be getting 3-6 months of expenses in savings (actually probably a money market account, those make a bit more then savings accounts), and that's all I remember off of the top of my head. Honestly, that's all I really care about right now, let us get through that, and then I'll worry about the next one.

We live on a budget, mostly, and are dorks when it comes to money, Pave much more then me. For example, we 'found' enough money for a flat screen tv for our bedroom, and then decided that if we could spend that much on a tv, we could send it to the student loan (damn you student loan!)... so off went a check to the loan company. Within the last month we finished off part C! YEA!!!

So sorry... that took a lot of space, but I so believe in it! In fact, we have paid for someone to go through FPU (kinda a 'pay it forward'), and have bought the book "Total Money Makeover" for several friends.
Now, for the candles- We have three dogs, three big, stinky dogs. I was hesitant because these are about 7 dollars, but they said that they burn for 30 hours, so I figured what the heck. Can I just say, they are worth their weight in GOLD!!! Not only do they make the room smell good as they are burning, but WAY after you blow it out. Anyways, they are my new favorite thing!