Ok, so the Christmas music has been playing since before Halloween, it has gotten me in the mood. Pave and I decided we would try to put lights up in our new home. The last time we did it, we lived on base, and did it two weeks before Christmas, and about froze our butt's off! Well, we had bea-uti-ful weather today (actually all week). We decided to put them up while it was so nice, and just not turn them on until it gets closer to Thanksgiving. Our neighbors laughed at us... but when they are putting theirs up in the nasty December weather... who will have the last laugh then?!? 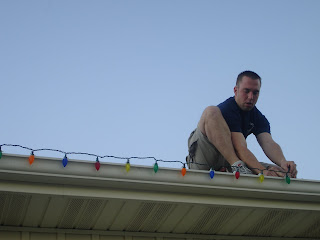 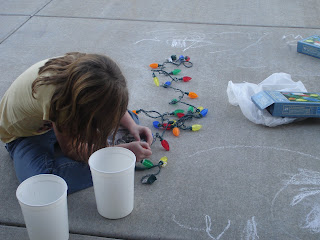 On a COMPLEATLY different note- We said HASTA to my student loan company... it only took us five years to pay it off (ok, about four between the last semester of college we pulled them out for, and the 6 months I had after I graduated until I had to start paying them back- but still!) Within the last 18 months, we had made the decision that we wanted them g-o-n-e gone before we had a baby. Haha, joke is on us! We're not even pregnant!!! Oh well- it still feels fan-freaking-tastic for it to be paid off!