I love to do projects around the house... much to Pave's dismay. Granted, I sometimes have to use his muscle... but most of the time I'm happiest if he just leaves me alone until I'm done.

I hated the 'clutter' that was in our laundry room. In our old house, we had a separate room just for laundry, and so I could shut the door. Here, our laundry room is off the kitchen, and the pantry is off of it to the left, or you can go straight out to the garage.

We feed the dogs in the pantry, so there is no shutting the door to the laundry room without a major upheaval! And, since the dog's outnumber (and out weigh) the humans....

I'm not sure how I found Sherry and John over at Young House Love, but I'll be honest, I've added their blog as one of the tabs that opens up every time I start Internet Explorer!

They have done a ton of projects around their house, but this is the most recent one I copied. Imitation is the highest form of flattery right!

We had this matchstick curtain from our base house, but haven't had a place to hang it in the two houses since then! Pave, on several occasions, tried to throw it away, but I wouldn't have it. I always screamed "I spent a bunch of money on that, it's not going anywhere" calmly asked him to just take it up to the attic because someday we might use it.
This is what our laundry room looked like before... just a bit much going for me! 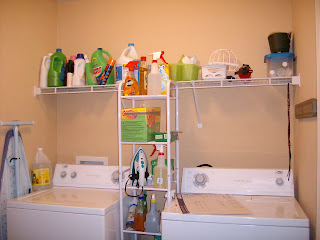 I was afraid of just hanging it directly into the ceiling, even with anchors, because where the hangers were for the blind, there was a stud no where near them! I just got a 1''x 3'' board and used screws wherever there was a stud. 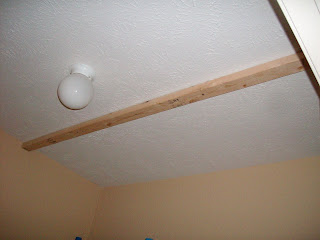 The blind was originally 8' long, but our area was just over 6', so I had to cut it down. I used Pave's circular saw (shhh... don't tell him, he hates it when I use his tools when he is at work, he thinks I don't know how to use them.... if only he knew!). The only problem was, this is what the edges turned out like...
VERY JAGGED!!! What to do, what to do. I thought about putting ribbon around it, the way you would bind a quilt, just to make it look a bit better, but decided that I would try another way to make it a little straighter. I tried to use our 'garage scissors' (the were Kitchen scissors until Pave used them to cut stuff outside), but the matchsticks were just a bit to thick to easily do it. 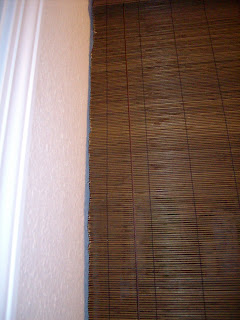 I used our L ruler to make sure the matchsticks were straight, (it was actually really easy, I just moved them according to the string that is woven between them all). Then I used a pencil to draw my straight line, and cut it with our 'rose clippers'. I honestly don't know what they are really called, we just use them to cut the roses! 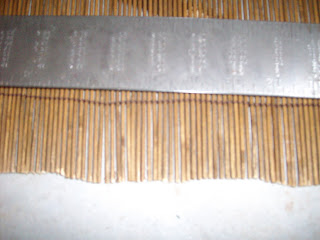 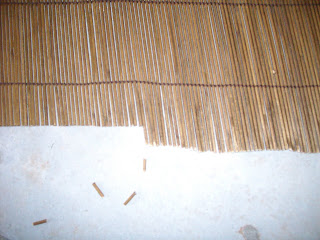 Pave also thought that it was a little bit to closed in where the original placement was, so I pushed it back. 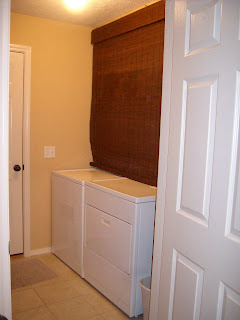 Now... what will my next project be?