When we moved down here, we bought a fourclosure. No one had lived in it since it was built, so it was like a brand new home... almost half off!
Fine and dandy... except that there were things that were neglected, like the yard. It was overgrown with clover. Again fine and dandy, can be delt with evenutally. But. And this is a big but... our little boy Baxter we found out is alergic to clover.
Nice hunh! So since May, we have been shoving 2 benadryl tabs down his throat twice a day... NOT FUN!
We knew it was best to seed in the fall, so we just delt with it until now. It's fall... so now we seed. I had gotten an estimate from a local company, they wanted almost $1100.00 to ariate and seed our yard. Are you kidding me.... so we went and rented an airater this morning, and I bought seed yesterday.... 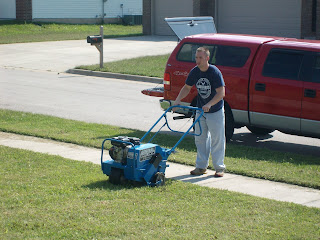 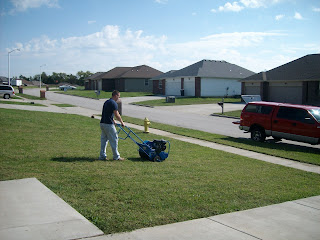 Pave did the airating, and then I went behind him and seeded. He finished airating the back yard, just as I was finishing up the front yard, so he left to go take the machine back, since we were on the clock.

I had borrowed a seed thrower that was on wheels, but it only dropped seed straight down, so it took forever for me to do just the front yard. I decided to try the hand held one we had bought a while ago for ferterlizer, but never used. Awesome!

I had a pain in the ass great dane, helpful grass seed fairy, that walked right next to me and blocked half the damn seed from spreading, oversaw the spreading of her seeds.

She litearlly walked The. Whole. Yard. with me... I finally just had to laugh. She had grass seed all over her back and face. By the time I went to grab the camera, she had gotten most of it off her face, but you can still see it all over her back! 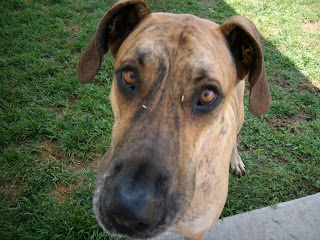 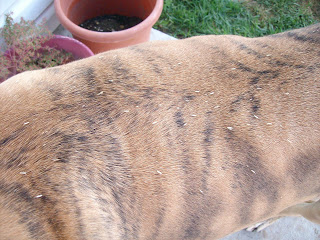 It is supposed the rain tonight and a few times this next week, so we should only have to water a few days... and now, in 10-14 days, we will have little grass blades... hopefully... if the seed fairy did her thing!


Let's just hope that the more then one thing in our life will be growing in two weeks! *wink, wink*