Well, I've finished up the Asian inspired office (actually it was just a transfer from all the Asian stuff that used to be in our bedroom). It ended up being a mossy colored green, with a lighter green accent wall. I love it! I also re-arranged the office set up, so it feels a bit bigger, which is a challenge when there are three HUGE dog crates (ok, so its also know as the 'dog room' as much as the office), a bookshelf, a four drawer filing cabinet, desk, and printer cart.
I had originally wanted to put curtains in that room, but once I got them home, and had them in the room... I decided the plantation blinds were good enough. Once I took those back I used the money to grab a couple of pails of paint! YEA! I love paint! I especially love that I have successfully put a real dent in the 'peachy/salmon/tan' wacky paint that our WHOLE house was painted in. Well, to go with that amazing paint inside, our shutters were stained this horrible orange color. I have driven around the subdivision several times, and there are a TON of houses with this color stain on their shutters, all with different brick colors. It doesn't look good on one house. Not. One. House.
So, that was the project I tackled this morning. My mother in law helped me pick out the final colors this weekend, so why delay? Our shutters are a really rough cedar (I think). It took several coats, because the wood kept soaking up the paint, and it was hard to get in all the cracks and crevices.
So... on to the before and after pictures!
This is the front of our house... yes, I should have seen the clouds and thought twice... but I was so excited to paint! 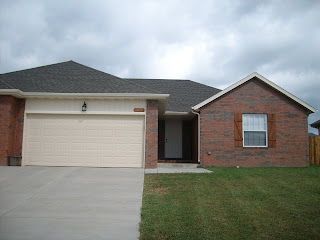 A close up of the nasty orange shutters... my last look at the before I attacked them with a paint brush! 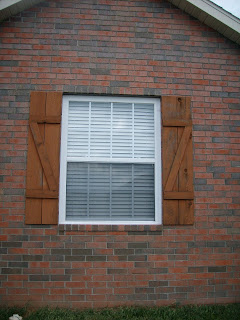 I LOVE the way they turned out! 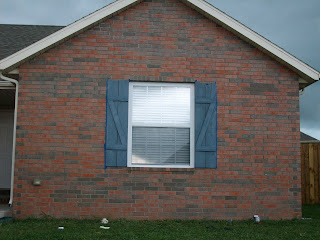 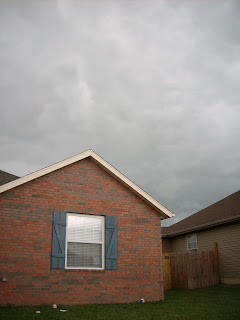 A wider view of the house... and the thought "oh shit, are those rain clouds?" I thought maybe they would go around us, or just rumble, but not spit at us.... nope. It started to sprinkle, so I got some plastic trash bags. Just as a side note, not even duck tape works on wet brick! By the time I gave up it was POURING!!! Ugh... I just hoped for the best, and kept, checking every few minuets to make sure that the paint wasn't dripping down the bricks. Pave would NOT have been happy about that! Luckily, it was dry (enough), and there isn't anything that dripped off... however, it's been raining hard for the last few hours, so I have yet to be able to go out and look at the paint job. I'm thinking because its such a rough cut wood, maybe I'll get lucky, and it won't show. I also got paint for the door. In our old house, I painted the door a maroon/brick red. It looked amazing, because we had a chocolate brown house... however, there is already A LOT of red on the front of our house, so I opted for a lighter blue then the shutters, but in the same color category. I don't dare do that project on my own... I don't think I can wrestle the door off the hinges by my self, so I guess it will have to wait till this weekend... If Pave has it off...